One day while walking my dog down by the beach, I took several photos of seagulls. When it came time to choosing a subject to paint, I scanned through my images and noticed that one particular seagull had only one leg. (Apparently it is quite a common sighting, as perhaps a seal wanted a quick appetizer.) On seeing his peg-leg I knew immediately that I had stumbled upon the legendary "Long John Seagull".

Long John Seagull is notorious for his unscrupulous actions, as he was responsible for gull-napping Johnathan and Sheldon and selling them as slaves to a lady in 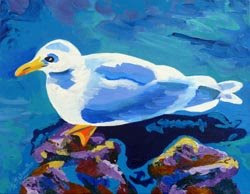 He is also rumored to have had a torrid affair with Sheldon and Johnathan's spinster aunt, Henrietta Seagull. He had his way ... then dumped her in the sea. She has never been quite the same since. She will soon find some solace as she is heading out to the prairies to spend some time with her nephews.

There is no telling what kind of trouble Long John and his Buccaneers will get into next!!

Posted by Susan Schaefer at 4:18 PM

Email ThisBlogThis!Share to TwitterShare to FacebookShare to Pinterest
Labels: acrylic, hot off the palette, paintings, seagulls