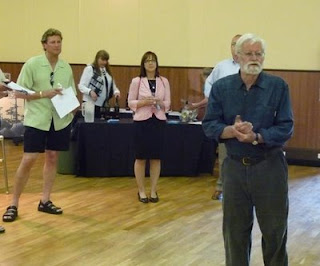 Yesterday I helped Ken Kirby set up his art show and attended his event called paint by Numbers. I idea behind the event is that Ken, with the help of his posse, sold 40 tickets at $500 per ticket. He then displayed 40 paintings, a great majority of which were his own design, others were collected from local artists. Each entry was guaranteed to leave the event with a painting. But ... and here is the catch, the tickets were drawn randomly out of a hat. As your number was picked you then had two minutes to decide on a painting. Near the end of the event, obviously the choices became slimmer and slimmer as the final number drawn had their pick of the last painting.

I should also mention that Ken Kirby is the president of the Nile Creek Enhancement Society, and all proceeds from the event will go towards the restoration of the ecological systems of the rivers and kelp beds.

It was grand event and something to look forward to for next year!!!

Posted by Susan Schaefer at 9:39 AM