Painting in the Garden Tour 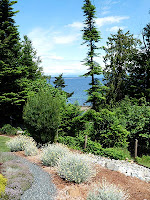 This past weekend I had the opportunity to be one of 15 artists who were painting in a garden during the Bowser / Qualicum Bay garden tour on beautiful Vancouver Island. This was a fund-raiser for the Lighthouse Community Centre.


I was fortunate to have this glorious view to inspire me throughout the day. Although the weather was not cooperating, luckily I had taken photos beforehand to recall a sunnier day. 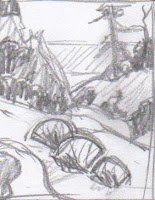 As I was taught be several instructors, always start with a sketch. I reluctantly did my due diligence and made several small sketches. "If it doesn't work on paper, it's not going to work on the canvas', echoed Mike Svob's words in my head. Don't you just hate it when they are right?

After a few thumbnail sketches, I had worked out some issues and had a plan to work from.

Working under an umbrella, I was able to capture the essence of the garden, while still visiting with the folks who were on tour.

At the end of the day, the painting was sold at a silent auction. Despite a little bit of rain, "that was a FUN day." 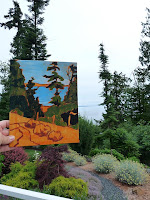 From the Prairies, to the West Coast and Beyond...
Susan
Posted by Susan Schaefer at 1:18 PM