Each April I feel a little sad, as I recall saying good-bye to Cheyenne 6 years ago.
This year, instead of reliving the sadness, I am going to tell you how great he was.

I rescued Cheyenne from the Regina Humane Society in Sept. 2000. He was 6 months old and had been locked up for the first 6 months of his life. He was a scared little boy. Driving back from Regina to my acreage he stayed curled up and whimpered the whole trip. I thought "Oh boy, what have I gotten myself into?"

I put him in the sunroom which was to be his bedroom. He had his own full sized couch, food and water and lots of windows. The next morning, when I looked at my dog, I saw a total transformation. He was alert, curious and full of joy. Taking him outside the first few days was quite funny. It was all new to him. He was curious about butterflies, he hopped the hills chasing grasshoppers and literally smelled the flowers.  Look out for the bees! 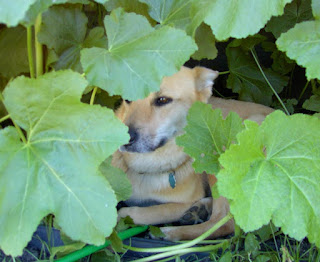 I quickly became aware of what a gift Cheyenne was. His intelligence was none that I had ever experienced with a dog before. I would tell him something once or twice and he just GOT IT. I didn't train him. He just knew. He picked up on the slightest nuances, often knowing what I was going to do - before I did. He had an old soul of a re-incarnated swami. 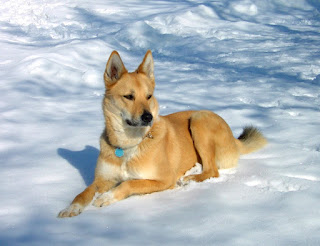 We became quite the team in the Qu'Appelle Valley. My dog was always with me. His job was to protect. I had no problem leaving my vehicle unlocked with my purse in it, as long as Cheyenne was there. You know that old Peter Sellers movie where they say "Does your dog bit?" "Yes, my dog does bite - if he doesn't know you." As soon as I would tell him "It's O.K." then he would relax. 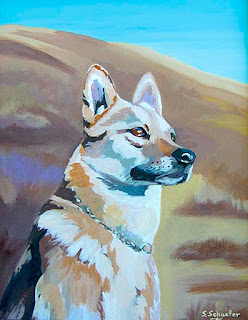 He quickly warmed the heart of my mother, who would say "No dogs allowed in the house. O.K. maybe he can stay in the porch. " Next thing you know, he was in the kitchen and it didn't take long till he was stretched out on the living room carpet doing some doggie yoga moves. "But don't tell the others", mom would say. I recall one Christmas when there were three dogs bounding across the furniture in the living room, and my mother just threw her arms in the air and laughed.

He was also the avenger of all things unjust. If a neighbourhood dog was getting picked on by another dog, he would quickly take down the bully. He also did his best to keep the coyotes off the property, often chasing them down the road. Cows were allowed only on the other side of the fence. 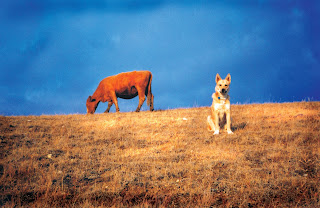 When I went to Mexico for a month and left him at the farm, I must say I was a bit concerned. My nephews were young and I feared that he might bite them if they got too rough. I obviously had nothing to worry about, as Cheyenne had such a gentle side to him. 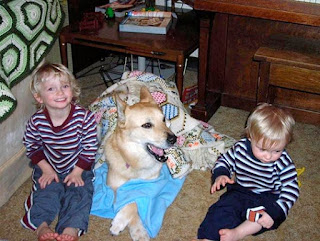 My neighbours Ken and Irene absolutely LOVED Cheyenne and he loved them too. On another trip to Mexico I left Cheyenne with them for a few weeks. On my return, I went to pick him up and Irene said "I hope you don't mind, but since it was his last night with us, we gave him a burger for dinner and ice cream for dessert." No I didn't mind. There was a bit of a hesitation from Cheyenne when I told him it was time to go home. He was probably thinking, "Hm, maybe I could just stay one more night?" 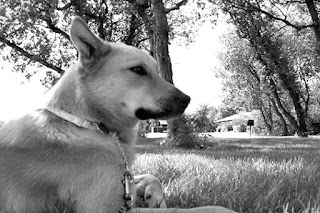 Cheyenne got cancer. When I had to say goodbye to my beautiful dog, it was one of the hardest things I have had to do. You may say that I rescued Cheyenne - but in truth he rescued Me.

(oh dear, and now I am starting to cry).

From the Prairies, to the West Coast and Beyond...
Susan
Posted by Susan Schaefer at 11:09 AM